When asked about their actions in a certain situation, many people will often claim that they carefully weighed the pros and cons before cautiously making a decision. However, this is often the opposite of how behavior actually takes shape. We tend to make decisions irrationally based on how we feel (or how we anticipate we’ll feel) and then justify those decisions rationally (Damasio, 1994).

Emotions dominate decision making because they motivate us to behave (i.e. avoid or approach).

The stronger or more intense (i.e., arousing or stimulating) our emotional experience is, the lower our ability to consciously evaluate the pros and cons of an offer or a situation. All of this makes us easy targets for marketers and advertisers.

Compliments and flattery are persuasive devices that can be used to influence decision making. 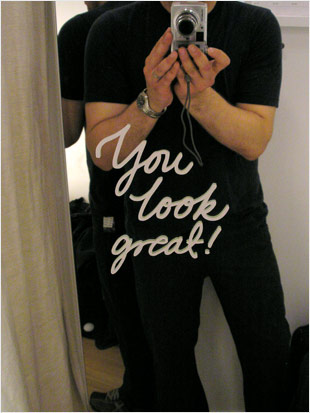 A few years ago, Trevor was shopping in a department store in Sweden. While browsing in the men’s section, he came across a pair of pants that he liked and decided to try them on. In the fitting room, he put on the pants, his back toward the mirror. Turning around to examine the fit, he was surprised to see the message in the image on the left.

Flattery has long been recognized as an effective persuasion method.

Even though Trevor was aware that the message was designed to persuade him to buy whatever he was trying on, it still produced an instant, unconscious emotional reaction. Part of that reaction can be attributed to sheer novelty, because he had never encountered something like this. However, the remainder of his reaction was due to a compliment offered, oddly enough, by an inanimate object.

Even a compliment from an inanimate object is more affective than no compliment at all.

The experience of being flattered is usually a pleasurable one, even when the compliments come from a few impersonal words written on a mirror. Tactics like this can often provide the touch of added influence that triggers a purchase decision. The more intense the emotional experience is, the lower our ability to consciously evaluate the situation.

When shoppers make purchase decisions, brain imaging has revealed that a choice is made between the pleasure of purchasing and owning the item and the pain of spending the money. Researchers found that they could accurately predict shoppers’ purchase decisions by noting which area of the brain was more active when they considered a purchase (Knutson, Rick, Wimmer, Prelec, & Loewenstein, 2006). We explore this in much more detail in the book.

It’s not just retailers who are using emotion to influence your buying habits and purchasing decisions.

The vast majority of pharmaceutical advertising (95%) relies on some sort of emotional appeal (Frosch, Krueger, Hornik, Cronholm, & Barg, 2007). When people get ill, you might think that they’d be looking for the most up-to-date information to help diagnose their illness and choose the appropriate medication. This would likely include descriptions of symptoms, possible risk factors and probable causes. However, a review of pharmaceutical advertising (Frosch, Krueger, Hornik, Cronholm, & Barg, 2007) showed that:

Incidentally, not one mentioned lifestyle change as an alternative to their products. The ads often framed medication use in terms of losing (58%) and regaining (85%) control over some aspect of life (Frosch et al., 2007).

Marketers and advertisers in a number of industries clearly understand that emotions dominate decision making. It’s time that designers and UX professionals understand this as well.